During this time of Global Donut Warfare, Miss Moneypenny has been training a secret defense squad under the command of Wing Commander Plenty O’Toole… 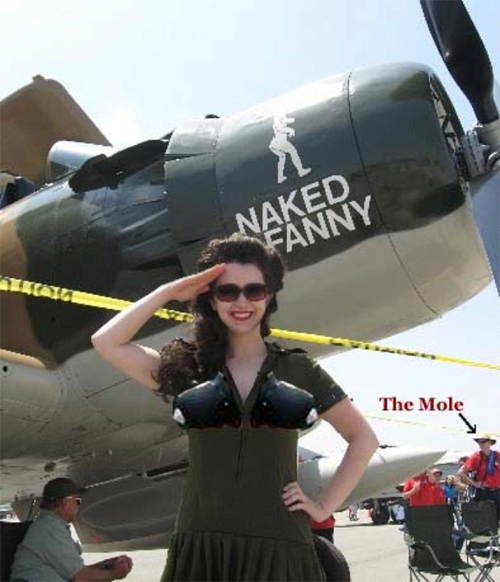 Robert, flagged as “The Mole” in the above surveillance photo, was caught infiltrating my Bra Boot camp. Plenty O’Toole was filling her heavy hangers for a Bra Bomb training mission and was unable to detain The Mole.

At the moment, Miss Moneypenny has been unable to reach Speedy Starbucks for comment on the Redneck Sugar Strike.

Battle Update, 0435 hours May 8: We have lost contact with Speedy Starbucks due to Sugar Whiteout conditions. Apparently, Robert planned a second sneak sugar strike on Hollydale with a secret Wing-nut leader. News Reports will be posted as soon as communications are restored!

Due to the Powdered Sugar Strike Storms, my “Failure Reporting and Corrective Action System” (FRACAS) is down causing breaking news to be slowly relayed to my news desk from the war correspondents on the front lines like the
Jelly Filled Fallout Report posted by Fracas on May 7, 2008 at 1145 hours about a nekkid Saskatchewan being sprayed with sprinkles!

Meanwhile, back at the Hollydale ranch Olga and Speedy were taking a Dunkin’ Donut break!

Battle Update, 2154 hours May 8: Since Plenty O’Toole captured Robert, we have not seen or heard from Crusty and Plenty O’Toole. Will a Under-The-Cover Black Brassiere volunteer to do some reconnaissance work?