Will their Silicone figure bounce back to compete with the plastic beauty of Barbie?

Since the debut of Barbie Doll at the American International Toy Fair in New York on March 9, 1959, the leggy amply breasted slim-waisted blond plastic fashion icon has been setting new social standards.

Many critics believe that Barbie’s unrealistic plastic proportions pose problems for young girls who may have struggled with their body image and self-esteem issues.

Although the trendy toy may have inspired young girls, her unattainable measurements have been a topic of a bizarre controversy for years.

For fun, plastic Barbie can be compared to “real” life Barbies by projecting her 6-inch bust, 3.75-inch waist, 5-inch hips, and her 11.5 to 12-inch height to the “real” life dimensions of two “Spalding” Barbies:

Seems like both plastic Barbie and the rubber Barbie’s have achieved similar unattainable measurements if the huge difference of the bust measurement due to silicone breast implants wasn’t a factor. For the plastic Barbie doll to be more life-like, her plastic hips should be 5.3125 inches yet, Barbie’s critics need to remember she is a girl’s play doll.

To keep up with American trends, Barbie will now teach girls how to date younger men as….

For Music Monday, Barbie Girl by Aqua, 1997
Miss Moneypenny is undercover sipping her first Barbietini in the first House of Barbie in downtown Shanghai, China…

To complete Barbie’s 50th Birthday party, we need to throw a chicken on the Barbie… 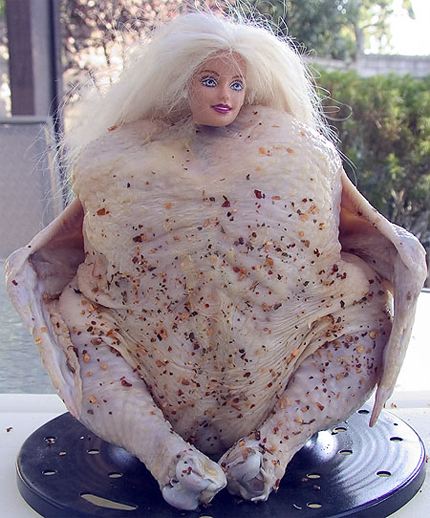 Note: The x-ray image of Spalding Pam has been posted everywhere on the internet for years and the original Photoshopper remains a mystery.