Will Barackhis Kahn Obama find Kony hiding in the Bush? 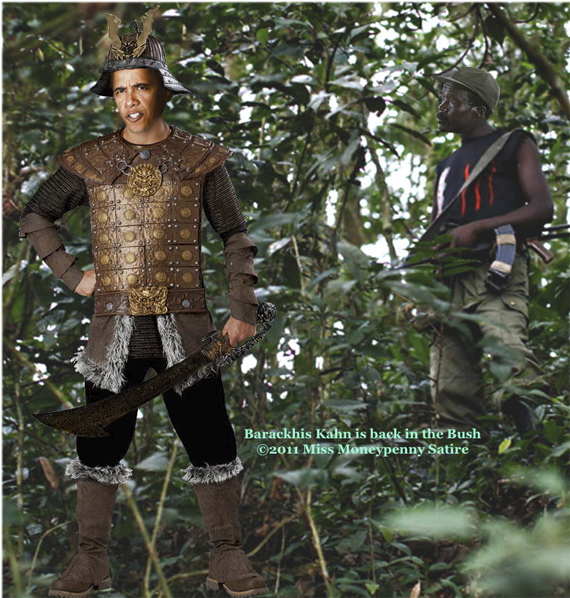 What would Americans say if George Dubya Bush sent U.S. forces into one of Africa’s bloodiest conflicts?

On Oct 14, 2011, Barackhis Kahn aka Barry Soretoro aka Emperor Barack Obama informed Congress that he deployed 100 Special Operation armed advisers to Uganda on Oct 12th to advise regional forces in their fight against the Lord’s Resistance Army and assist in “the removal from the battlefield” of Joseph Kony, the elusive leader of the guerrilla group.

Since 2008, the United States has provided military assistance to the region at a cost of about $40 million. Barackhis Kahn claimed the deployment was justified by a law (111-172). Since Special Operation Forces will provide security and combat training to African units, critics believe the mandate for armed advisers is relatively aggressive.

After Operation Lightning Thunder failed to apprehend Kony in 2009, Barackhis Kahn signed the Lord’s Resistance Army Disarmament and Northern Uganda Recovery Act of 2009 (S. 1067) into Law (111-172) on May 24, 2010. The law authorized funds for humanitarian relief and reconstruction, reconciliation, and transitional justice, and for other purposes as well as designating LRA leader Joseph Kony as a “specially designated global terrorist” pursuant to Executive Order 13224.

Note: George Dubya Bush authorized the Pentagon to send a team of 17 counterterrorism advisers to train Ugandan troops. The American force never became involved in the ground fighting according to the New York Times.