Will RINO Romney Reflect the better half of Obama? 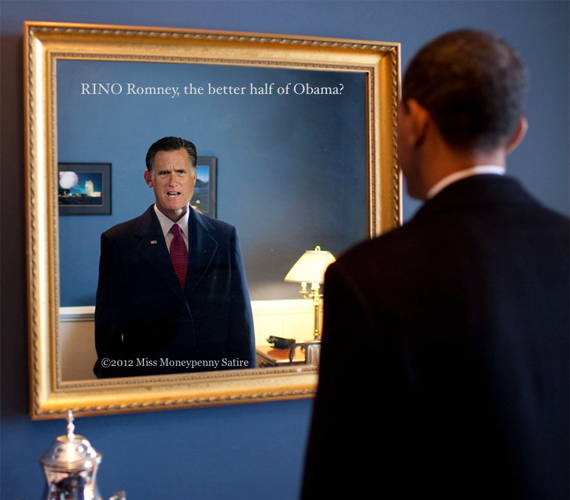 Banking on your Vote

1. Wall Street ‘invests’ millions of in campaign contributions on Obama and Romney.

“… Killing all the jobs… and the TARP Program kept that from occurring” – Mitt Romney on Neil Cavuto’s “Your World” 1/28/10.
Like Obama, who voted for TARP as a Senator and continues to support and defend it as President, Mitt Romney also continues to support TARP and taxpayer handouts (bailouts) to wealthy companies with irresponsible management that are too big to fail.
The Bain of Mitt Romney’s campaign is the $10 million bailout (a taxpayer guaranteed Federal Deposit Insurance Corp. loan) in 1990 to save his corporation, Bain & Company.
Obama and his administration has Failed to prosecute any Wall Street executive for financial fraud related to the 2007-2008 economic collapse.

“I think there is need for economic stimulus. Americans have lost about $11 trillion in net worth. That translates into about $400 billion a year less spending that they’ll be doing, and that’s net of additional government programs like Medicaid and unemployment insurance. And government can help make that up in a very difficult time. And that’s one of the reasons why I think a stimulus program is needed.” –Mitt Romney on CNN late edition with Wolf Blitzer – Jan 4, 2009
Romney Flip-flopped 10 months later stating, “Their Stimulus ‘Didn’t Work.” –Mitt Romney on CBS News with Harry Smith – November 2, 2009

5. Romney and Obama believe in Big Government as revealed by their track record of being big spenders while in office.

7. Romney and Obama do NOT support balancing the federal budget.

“We don’t need a constitutional amendment to do our jobs.” – Barack Obama Press Conference – July 15, 2011
Over the next 10 years, the federal budget plans of Mitt Romney and Barack Obama will add trillions of dollars to the unsustainable national debt.
Paul Ryan claims Romney Budget Plan of adding $3.4 trillion to the National Debt will Prevent a Debt Crisis.

8. Obama and Romney have a poor record of creating policies to help Job Creation.

10. Romney and Obama accuse each other of shipping jobs out of the country.

Romney’s campaign ad claims that over 582,000 manufacturing jobs in the U.S. were lost to low-wage countries like China under the Obama administration yet, from 2008 to 2010, U.S. trade with China alone cost about 450,000 American jobs.
Obama’s campaign ad claims that Mitt’s firm owned companies who were “pioneers” in the outsourcing of American jobs to places like China and India yet, Mitt Romney wasn’t managing Bain Capital “outsourcing” was going on.

12. Obama and Mitt Romney believe in the “independence” of the Federal Reserve from Congress.

13. Obama and Romney have said that Federal Reserve Chairman Ben Bernanke did a good job during the last financial crisis.

“He’s done a pretty effective job keeping us from having a total financial meltdown.” – Mitt Romney on Neil Cavuto’s “Your World” – Jan 28, 2010

14. Obama and Romney supported the reappointment of Ben Bernanke as Chairman of the Federal Reserve.

15. Obama and Romney oppose a full audit of the Federal Reserve.

17. Romney and Obama believe in the theory of man-made global warming.

“I am not a scientist myself, but my best assessment of the data is that the world is getting warmer, that human activity contributes to that warming, and that policymakers should therefore consider the risk of negative consequences.” – Mitt Romney, 14 Questions by Scientific American and Science Debate – Sep 4, 2012
“Climate change is the one of the biggest issues of this generation, and we have to meet this challenge by driving smart policies that lead to greater growth in clean energy generation and result in a range of economic and social benefits. Since taking office I have established historic standards limiting greenhouse gas emissions from our vehicles for the first time in history.” – Barack Obama, 14 Questions by Scientific American and Science Debate – Sep 4, 2012

18. Romney supports a “cap and trade” carbon tax scheme (like Barack Obama) on a Global basis.

“I support it on a global basis. It’s one of the possible solutions that I am looking at. I do not support for the US alone. I’d want to do it with other nations involved as a global solution.” – Mitt Romney, Manchester, New Hampshire Town Hall – December 27, 2007
Romney Flip-flopped almost 5-years later stating, “So I oppose steps like a carbon tax or a cap-and-trade system that would handicap the American economy and drive manufacturing jobs away, all without actually addressing the underlying problem.” – Mitt Romney, 14 Questions by Scientific American and Science Debate – Sep 4, 2012
On Jan 1, 2006, Massachusetts became the first state to set CO2 emissions limits on power plants under Governor Mitt Romney.
“Under my plan of a cap and trade system, electricity rates would necessarily skyrocket. Even regardless of what I say about whether coal is good or bad. Because I’m capping greenhouse gases, coal power plants, you know, natural gas, you name it — whatever the plants were, whatever the industry was, uh, they would have to retrofit their operations. That will cost money. They will pass that money on to consumers…” – – Barack Obama, San Francisco Chronicle Interview – January 17, 2008

Ironically, Mitt Romney‘s repeal of ObamaCare will eliminate the Mandate and keep the everything else in the law.

23. Mitt Romney and Obama support the warrantless wiretapping of the Bush-era Patriot Act.

25. Mitt Romney supports the Bush and Obama-era TSA: “we need tools when war is waged domestically.”

26. Romney supports the NDAA and said he would sign the controversial NDAA, including the NDAA provisions for the arrest and indefinite detainment of US citizens on US soil like Obama did.

27. Romney and Ryan support strong>HR347 (The anti-Occupy or Trespass Bill) which restricts Political Protests and our First Amendment Liberties.

28. Barack Obama and
Mitt Romney believe that the federal government should be able to indefinitely detain American citizens who are considered to be terrorists.

29. Mitt Romney and Barack Obama believe that American citizens suspected of being terrorists can be killed by the president without a trial.

30. Barack Obama has failed to close Guantanamo Bay as he promised and Mitt Romney wants to double the number of prisoners held there.

32. Mitt Romney and Obama have been pro-abortion most of their careers. Mitt Romney‘s “conversion” to the pro-life cause has been questioned by many. Mitt Romney has made millions on Bain Capital’s investment in “Stericycle,” a company that incinerates aborted babies collected from family planning clinics.

33. Romney and Obama are extremely soft on illegal immigration.

“my view is that those 12 million who’ve come here illegally should be given the opportunity to sign up to stay here” –Mitt Romney on Meet the Press – Dec 16, 2007

36. Obama and Romney have “evolved” on gay marriage.

37. Barack Obama and Mitt Romney believe that a “two state solution” will bring lasting peace between the Palestinians and Israel.

“I believe in a two-state solution which suggests there will be two states, including a Jewish state. I respect Israel’s right to remain a Jewish state. The question is not whether the people of the region believe that there should be a Palestinian state. The question is if they believe there should be an Israeli state, a Jewish state.” Mitt Romney
Yet, Mitt Romney at a private fundraiser dismissed the two-state solution by stating, “The idea of pushing on the Israelis to give something up to get the Palestinians to act is the worst idea in the world.”

38. Both Barack Obama and Mitt Romney agree that preventing Iran from acquiring nuclear weapons is a national security priority for the United States.

39. Both Mitt Romney and Barack Obama would unilaterally take the US to war against Iran to prevent it from acquiring a nuclear weapon.

41. Barack Obama and Mitt Romney will Not eliminate the income tax or the IRS.

44. Romney and Obama believe that the president has the power to Declare War without getting the Constitutional approval of the U.S. Congress.

“I don’t believe at this stage, therefore, if I’m president that we need to have a war powers approval or special authorization for military force. The president has that capacity now.” –Mitt Romney on Face the Nation – Jun 17, 2012
Romney was referring to President Obama violating the Constitution’s separation of powers with U.S. military involvement in Libya.

45. For the first time since 1944, this is the first election where both candidates, Romney and Obama, have never served in the military.

46. Defense Spending has increased under Obama from $616 billion under Bush in 2008 to $768 billion in 2011. Both Obama and Romney want boost Military spending.

“By the way, we created more jobs in Massachusetts than this President in the entire country.” – Mitt Romney, Jan. 3, 2012

Massachusetts ranked 47th in job growth during Romney’s entire term. Romney took office during an economic upswing yet, Massachusetts’ net job growth of 1.4 percent was far below the growth of the national average at 5.3 percent.

Obamacare aka Patient Protection and Affordable Care Act contains 18 fees, penalties, and taxes which will increase taxes $503 billion from 2010 to 2019.

Romneycare has increased private insurance costs by $4.3 billion, increased federal spending by $2.4 billion on Medicaid, and Romneycare is estimated to cost $2 billion more than was budgeted over 10 years.

Eventually, RomneyCare like ObamaCare will collapse under the weight of its own costs and inefficiency.

Romney’s Record as Governor of Massachusetts…

(1) Massachusetts ranked 47th in job growth during Romney’s entire term. Romney took office during an economic upswing yet, Massachusetts’ net job growth of 1.4 percent was far below the growth of the national average at 5.3 percent.

In his first year as Governor, Romney increased the Gas Tax by 400% to raise taxes by $60 million per year.

Fee Fee Romney increased fees and taxes to the taxed tune of $740.5 million.

The father of RombamaCare has increased private insurance costs by $4.3 billion, increased federal spending by $2.4 billion on Medicaid, and Romneycare is estimated to cost $2 billion more than was budgeted over 10 years.

7. The unemployment rate in the United States has been above 8 percent for 43 straight months from Feb 2009 to Aug 2012.

10. The percentage of working age Americans with a job has been below 59 percent for 36 straight months

11. According to the National Employment Law Project, 58 percent of the new jobs created have been low paying jobs.

12. According to the Center for Economic and Policy Research, only 24.6 percent of all of the jobs are “good jobs.”

13. In 2011, 53 percent of college graduates under the age of 25 were either unemployed or underemployed last year.

14. The number of jobs created by new businesses decreased by approximately 1 million from 2008 to 2010.

15. One out of every four workers earn less than $10 per hour in the ‘Recovery’ from the Great Recession.

17. In the past decade, insurance premiums have increased three times as fast as wages.

21. Since 2009, the cost of Household electricity skyrocketed by $300 in one year to $1419 in 2010. Electric rates have increased above the inflation rate for five consecutive years.

flic.kr/p/bTQ5Cz The Life of #Julia: a story of one woman’s struggle with her drug-like dependence on Socialism #Obama2012 #Sgp