PTL: Evangelists Do it with Lay people

Jimmy Swaggart Heaven Or Hell by In Living Color

PTL Has Gone To Hell by Reverend Needmore

(1) In 1987, Jimmy Swaggart discredited Jim Bakker, a rival Assemblies of God minister and Televangelist, by exposing Bakker’s extramarital affair. The sexual encounter with Jessica Hahn was revealed after Praise the Lord televangelist Jim Bakker resigned on March 19, 1987. According to Hahn, she was drugged and raped by Bakker and another preacher, John Wesley Fletcher on Dec 6, 1980. Bakker claims the affair was consensual yet, Paul Roper, an Anaheim church consultant, negotiated a $265,000 financial settlement between the two for her silence and Roe Messner, the future husband of Tammy Faye Bakker, lent PTL $265,000 to cover up the brief sexual affair.

During Bakker’s Federal Fraud trial, Richard Dortch, PTL’s executive vice president, testified that Jim Bakker approved paying Hahn $265,000 in church funds to keep her quiet about the sexual encounter. Dortch also claimed he was in a ”state of shock” when Jessica Hahn threatened to sue the evangelical empire for $12.3 million over the 1980 sexual encounter. In this tangled web of deceit, both Messner and Dortch could be telling the truth. The church funds may have been used to either pay Hahn directly or used to pay back Messner’s loan claim.

After defrauding $158 million from people who had purchased $1,000 life memberships for a lifetime of vacation lodging at Heritage USA, Bakker was convicted and sentenced to 45 years in 1989. Bakker served five years in prison after an appellate judge reduced his sentence.

Jessica Hahn went on to spread her 15 minutes of fame by posing nude for Playboy in the November 1987 and September 1988. 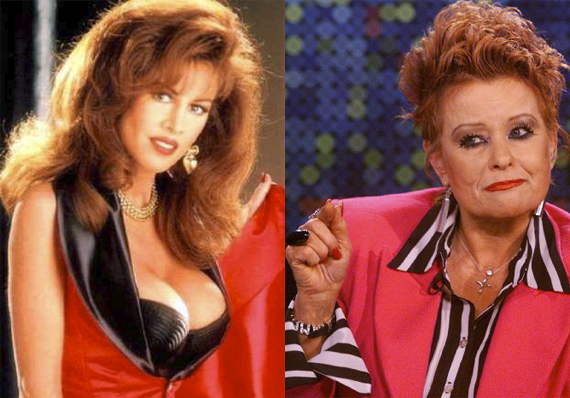 Hahn claimed she bared her breasts and her soul to purge the probing memories of the sexual tryst with Jim Bakker and John Wesley Fletcher in a Florida hotel.

Fellow Fornicator Jimmy Swaggart fell from grace after former Assemblies of God minister Marvin Gorman revealed photos of Jimmy Swaggart leaving Room 7 at the Travel Inn Motel in New Orleans to Raymond Carlson, the Assemblies of God Superintendent, on February 16, 1988. Gorman also had photos of Swaggart outside of Room 7 with Debra Murphree, a local prostitute, who claimed to have posed nude for Swaggart and she failed a polygraph test after Murphree offered to sell the story to the National Enquirer for $100,000.

Marvin Gorman was defrocked from the Assemblies of God after Jimmy Swaggart exposed Gorman’s secret affairs in 1986.

Swaggart Χες (666 in Greek appears to be seX spelt backwards)

On February 21, 1988, Jimmy Swaggart confessed his transgressions 339 days after Jim Bakker resigned from PTL. Without providing details, Swaggart confessed, “I have sinned against You, My Lord, and I would ask that Your precious blood would wash and cleanse every stain until it is in the seas of God’s forgiveness.” on his Teleministries show. His Confession clip was played repeatedly on news and tabloid television programs. On Feb 25, 1988, Debra Murphree claimed Swaggart was a regular customer who preferred to watch her undress only.

The Assemblies of God immediately defrocked Swaggart after he returned to the pulpit at the end of a three-month suspension which was extended to two-years for sexual immorality. Swaggart became an independent, non-denominational Pentecostal minister who was later caught with Rosemary Garcia, a prostitute, by the California Highway Patrol (CHiP) for driving on the wrong side of the road on October 11, 1991. Ms. Garcia told reporters, “He asked me for sex. I mean, that’s why he stopped me. That’s what I do. I’m a prostitute.” after they asked her if Swaggart had suggested any “laying on of hands,” a pun on spiritual healing. Instead of confessing, Swaggart told his sheeple at Family Worship Center that “The Lord told me it’s flat none of your business.”

(2) In accordance with Title 17 U.S.C. Section 107, Photos of Jim Bakker, Jimmy Swaggart, Jessica Hahn, Tammy Faye Bakker, Debra Murphree, and Frances Swaggart were modified and/or used for the Fair Use of comical commentary. We believe this constitutes a ‘fair use’ of any such copyrighted material as provided for in section 107 of the US Copyright Law.