Did Obama Suffer Profiling when Barack Bush was elected for a Third Term?
For your Eyes Only, Barack Bush the Third 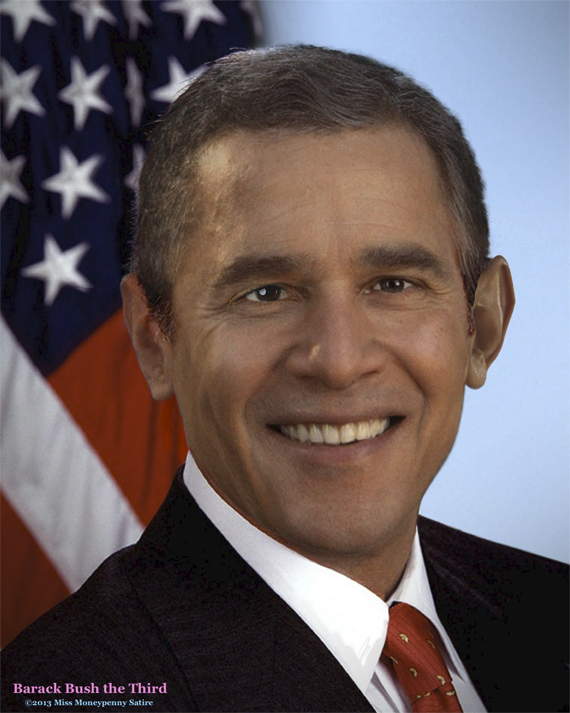 According to researchers from the New England Historic Genealogical Society, George Dubya Bush and Barack Hussein Obama are 10th cousins, once removed, and linked together by Samuel Hinkley of Cape Cod, who died in 1662.

Birds of of the same feather,
Always flock together as…

Both Bush and Obama support the TARP Bankers Bailout,

Both Bush and Obama support the Patriot Act,

Both Bush and Obama support FISA even though Senator Obama was against Illegal Wiretaps, Barack voted for H.R. 6304.

Remember when Obama promised to withdraw two brigades per month and to have all US combat troops out of Iraq by 2009? Source: CNN Democratic Debate on the Iraq War ~ Jan 21, 2008.

Yet, our combat mission in Iraq will end by August 31, 2010 and all troops will be out of Iraq by Dec 31, 2011 as defined by the Status of Forces Agreement which was approved during President George W. Bush’s administration. Source: Transcript: Obama On Ending Iraq War ~ Feb 27, 2009.

Obama will end the Iraq War as Bush promised which he claimed Barack opposed and Hussein promised to end in 2009.

Now, that is ‘Real Change’ you Can Believe In.

Ironically, Cat Stevens (aka Yusuf Islam) wrote “Father and Son” as part of “Revolussia,” a proposed musical project with actor Nigel Hawthorne. The song was about a son who wanted to join the Russian Revolution against the wishes of his father. “Father and Son” was aired on progressive rock radio stations during the 70s when disc jockeys were discussing social issues between playing “progressive ‘music for the head’.”

Father And Son by Yusuf Islam (Cat Stevens) in 2007

For Your Eyes Only by Sheena Easton

http://flic.kr/p/fdneSx  #ObamaSufferedProfilingWhen Barack Bush was elected for a Third Term.