Did Real Life imitate the Virtual Comedy of the C.A.B. Donut Wars???

Thanks to Michelle Malkin, a ultra conservative Fox News commentator and uber-blogger, a Cooking Terrorist Paranoia was created over Rachael Ray, the domestic diva, wearing a scarf that looked like a keffiyeh, a traditional headdress worn by Arab men. Malkin described the keffiyeh as “the traditional scarf of Arab men that has come to symbolize murderous Palestinian jihad.” 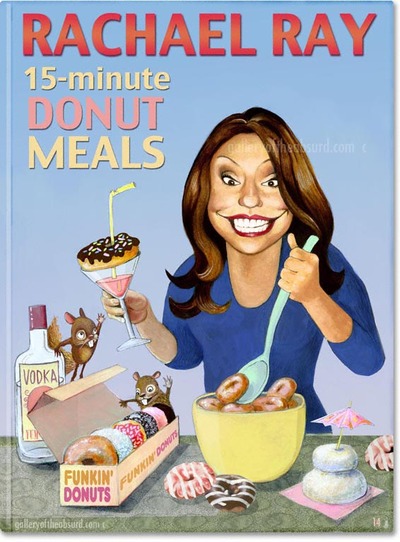 Personally, Rachael Ray can launch Dunkin’ Donuts and Coffee at me anytime wearing her paisley scarf! 😀

Due to the fear of a mass boycott from the conservative blogosphere, Dunkin’ Donuts (DD) removed the Rachael Ray online ad. DD stated, “In a recent online ad, Rachael Ray is wearing a black-and-white silk scarf with a paisley design. It was selected by her stylist for the advertising shoot. Absolutely no symbolism was intended. However, given the possibility of misperception, we are no longer using the commercial.”

Update, 0200 hours: For more on this Unbalanced Fox News commentator, please click the Fair and Balanced “Kill Me With Your Scarf” post by Oh My Word!

And, Speedy O’ Cat has more evidence to prove Rachael Ray is NOT a terrorist! <— Click the link to view the Cooking Spoons Star!

Tune into Rachael’s show on June 2, 2008 to find out if Speedy Speedcat is normal? 😉

For a Speedy Chickencat’s dream dinner delight, Rachael will cook her “Cacciatore Stoup with Turkey breasts and Sausage Meatballs” on Monday’s show!