Solargate: Solyndra is the Face of Obamanomics 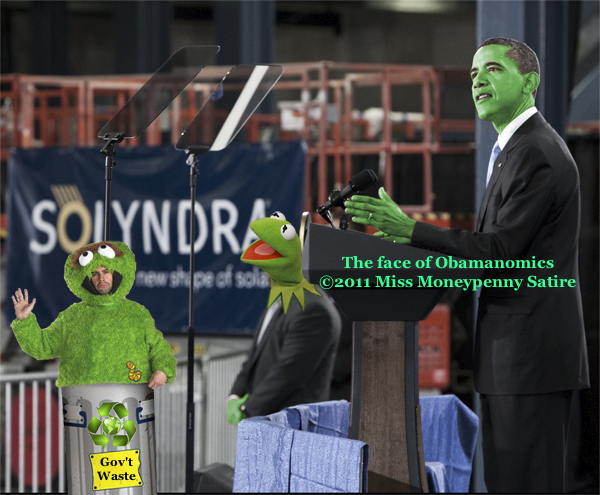 Photo Credit: ©2011 Miss Moneypenny Satire
Stimulus Side effects may include corruption, fraud, and bankruptcy. Ask your Obamacare doctor if Solyndra is right for you.

@moneypenny008
Miss Moneypenny
twitpic.com/6lvuju Side effects may include corruption, fraud, and bankruptcy. Ask your Obamacare doctor if #Solyndra is right 4 you
September 17, 2011 11:09 am via TweetDeck Reply Retweet Favorite

“I Want Your Money”

(1) My political Photoshop satire and political satire tweets were inspired by recent news summarized in the following timeline:

On December 27, 2006, Solyndra, Inc. first applied for the DOE Loan Guarantee under Section 1703 of the Energy Policy Act of 2005.
On Jan. 9, 2009 while Dubya Bush was still in Office, career civil employees (not political appointees) from the DOE credit review committee sent the loan proposal back to the department staff “without prejudice” noting that “the number of issues unresolved at this time makes a recommendation for approval premature at this time.”
On Feb 17, 2009, President Barack Obama signed his $787 billion Stimulus Package into Law (111-5). The Recovery Act included $8.5 billion to subsidize loans for renewable energy projects like Solyndra.
On Mar 6, 2009, eMail among staffers at the White House Office of Management and Budget (OMB), read , “DOE staff just told me there’s a 99 percent certainty that President Obama, on March 19 in California for other reasons, will announce that DOE is offering a loan guarantee to Solyndra. As far as I can tell the obligation won’t be entered into until May, but once the President endorses it, I doubt seriously that the Secretary will withdraw for any reason.”
On Mar 7, 2009, Biden Chief of Staff Ronald Klain’s eMail to OMB staff, stated, “Can we chat on Monday about the DOE flag in here on Solyndra … If you guys think this is a bad idea, I need to unwind the W[est] W[ing] QUICKLY.”
On Mar 10, 2009, an OMB staff email warned that “this deal is NOT ready for prime time.”
On March 20, 2009, Solyndra was the first clean energy company to receive an offer for a U.S. Department of Energy (DOE) loan guarantee.
On September 4, 2009, Obama’s DOE finalized a $535 million loan guarantee for Solyndra, Inc. to finance construction of the first phase of the company’s new solar manufacturing facility in Fremont, California.

Obama Bundler George Kaiser in 2009: It’s Time to Cash in on the Mother of All Government Handouts…

Solyndra investor and Obama bundler George Kaiser speaking about how he was trying to get as much of Obama’s giant stimulus payout as possible at a Rotary Club event in Tulsa, OK on July 8, 2009.

On Sep 4, 2009, Solyndra began construction of its second solar panel manufacturing plant (Fab 2).
On February 23, 2011, Obama’s Energy Department restructured the loan guarantee agreement with Solyndra in order to repay two Solyndra investors before the taxpayers are repaid in case of bankruptcy.

Both investors poured $75 million into the company when Solyndra nearly went bust in January.

Under the restructuring scheme, $150 million of government funds would be considered senior debt which means private creditors will be the first to be repaid before the taxpayers can recover the $385 million spent by Obama.

According to Rep. Steve Scalise (R-Louisana), the taxpayers became subordinate in the restructuring agreement in clear violation of the Energy Policy Act of 2005, which states taxpayer dollars must “not [be] subordinate to other financing.”

On July 13, 2011, a Solyndra letter to the Subcommittee of the House Energy and Commerce Committee stated the following fact, “Solyndra’s revenues grew from $6 million in 2008 to $100 million in 2009 to $140 million in 2010. For 2011, revenues are projected to nearly double again.“
On August 31, 2011, Solyndra suspended its manufacturing operations and immediately laid off approximately 1,100 full-time and temporary employees.
On Sep 6, 2011, Solyndra LLC, filed for Chapter 11 bankruptcy protection claiming they could not compete with the lower-cost Chinese rivals.

“This announcement today is part of the unprecedented investment this administration is making in renewable energy and exactly what the Recovery Act is all about,” Chief of Gaffe Biden said.

On Sep 8, 2011, the FBI and agents from the Energy Department’s inspector general’s office raided Solyndra headquarters in Fremont, California on the day Obama talked about using stimulus funds for job creation.

Unfortunately, California FBI spokesman Peter Lee said he could not reveal the details about the joint investigation yet, reporters believe the Justice Department and Inspector General are investigating Solyndra to find evidence that the company misled the government in 2009 as well as the details of their loan refinancing (restructuring) in 2011.

On Sep 23, 2011, Solyndra Inc. CEO Brian Harrison and the company’s chief financial officer, Bill Stover, declined to testify and invoked their Fifth Amendment right to avoid self-incrimination before the House Oversight and Investigations Subcommittee of the House Energy and Commerce Committee.

Talking is cheap… people follow like sheep,
How could Americans tell Obama deceived them so well,
Pity the Kool-Aid Kids will be the last ones to know,
Silence is golden, but the Kool-Aid Kids’ eyes still sleep.

(2) My Photoshop satire was created from Solyndra’s photo of President Obama’s tour of the Solargate company on May 26, 2010 and muppet photos.

And we can see the positive impacts right here at Solyndra.  Less than a year ago, we were standing on what was an empty lot.  But through the Recovery Act, this company received a loan to expand its operations.  This new factory is the result of those loans.” –President Obama

On Sep 28, 2011, SolarReserve LLC received a $737 million loan guarantee to build a solar-thermal plant in Nevada. PCG Clean Energy & Technology Fund (East) LLC is a investment partner of SolarReserve and PCG’s number two is Ronald Pelosi, brother-in-law of Nancy Pelosi, the Minority Leader in the Swamp of Shame.

Will Steven Mitchell, who serves on Solyndra’s board of directors and is also the Managing Director for Argonaut Private Equity, profit from his SolarReserve investment or Obama’s Stimulus Package?

The estimated cost of constructing a Photovoltaic Solar power ($4751/kW) generating plant is more than 10 times of the advanced open cycle gas turbine power ($420/kW) generating plants. Due to expensive construction costs, there is no free market incentive to build Solar Energy plants unless one receives Obama’s Green light for his Stimulus Package.